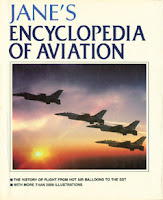 Jane's Encyclopedia of Aviation will tell you all about different kinds of aircraft and how they work and how much weapons they carry. I learned about many kinds of aircraft. I like airplanes because
my uncle was a pilot and I want to be a pilot. One of my favorite planes is the SU.37 it was a Soviet Russian fighter aircraft. Another aircraft is the F4E. phantom aircraft, it was an American fighter plane that served in the Vietnam War.

Posted by MrsCastro at 6:34 AM