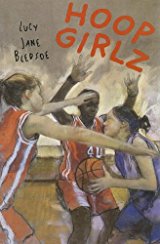 In Hoop Girlz by Lucy Jane Bledsoe, River is obsessed with basketball. She would love to be in the WNBA when she grows up. One day River decides to tryout for the school team. River is heartbroken when she finds out that she does not make the A-team, but her best friend, Kammie did. The coach tells River she has potential and she is put on the B-team. The B-team is certainly inferior to the A-team until River’s brother becomes the coach of it. Later on, The A-team and the B-team play against each other in a tournament. Will the B-team win? Will River win MVP of the tournament? Read the book to find out!


I really enjoyed this book because of how River dealt with not making it on the A-team.  It really was a tragedy to her and she totally dealt with the situation in a calm, mature manner.  I can relate to this story because there are teams that I have tried out for that I did not make, and like River, It only made me try harder for the next time.