"Sometimes people laugh when they like you. But sometimes they laugh to hurt you". This is a quote from a list of rules that Catherine has written for her little brother David. David has a disability called Autism. Because of David's disability, Catherine feels she has to help him learn about how to 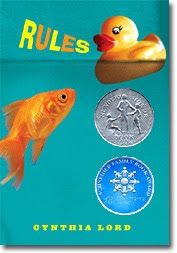 act, so that he will appear normal and not embarrass her.

When I was reading this book it reminded me of when I was in high school. I had a friend who was a little different from most of the other students. He was funny and smart and I liked him. But because he was different, people used to tease me for being friends with him. It was very hard to put up with the teasing, and keep him as a friend. So hard, that I eventually started to avoid him when I saw him in school. I could totally understand how Catherine felt about her friend Jason, who is in a wheel chair, and her brother David. I still feel bad that I avoided a good friend just because I wasn't strong enough to deal with the teasing.

Although this sounds like it's a very serious book, it is filled with scenes that will make you laugh. The author has a great sense of humor and David's character does a lot of funny things. You'll love the chapter called, "No toys in the fish tank." Go ahead read it; I dare you not to laugh!