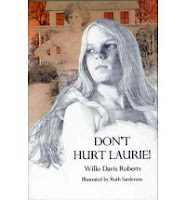 The book Don’t Hurt Laurie is about a girl named Laurie being abused by her mother.  It is realistic fiction and the main characters are Laurie and her mom Annabelle.  The theme of the book is child abuse and the story takes place at her house and school even though she moves all the time.  I think the author’s message is to inform you that this stuff really happens.  The mood of the book is sad but I would definitely recommend it.  I made a connection in knowing that, this stuff happens everyday.  The author has written other books such as Hostage and Kidnapped.  The author is Willo Davis Roberts and she is an amazing writer.  If you read the book, I hope you enjoy it as much as I did!

Don’t Hurt Laurie is about a girl who has a very abusive mother named Annabelle.  It’s realistic fiction because it could happen.  Laurie's mother only hits her when there are no witnesses.  Annabelle marries a guy named Jack, Laurie’s stepfather.  She also has a brother named Tim and a sister named Shelly.  One day Annabelle comes home from the hospital and gets mad and hits Laurie.  Tim yells and tells her to stop.  She hits Tim throughout the story.  Annabelle does injure Laurie, but never hurts Jack's kids.  What will the kids do?