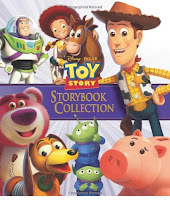 In Toy Story Storybook by Annie Auerbach, there’s a boy named Andy and he has a cowboy doll named Sheriff Woody. But Andy’s mom gave Andy a new toy, and his name was Buzz Lightyear Action Figure for his birthday. Woody doesn't like him at first but then he likes him at the end. There's going to be more adventures in their lives.